Drupella: The Tiny Scourge of the Reefs

Last week ATMEC’s first scientific output was published. The paper, published in the Journal of Molluscan Studies, details the mass egg deposition of the coral feeding gastropod, Drupella, in Mauritius. For people who are not avid marine snail experts that sentence possibly meant nothing but let me try and change that. To help explain why our paper was pretty cool and why you should care about it, let me give you some back story.


Drupella snails are small, less than 5 cm long, muricid snails who feed on living coral tissue, making them corallivores. Drupella naturally occur in low abundance on reefs (<1 per 10m2), however as anthropogenic threats have continuously changed our oceans, Drupella populations have skyrocketed. One of the first Drupella population outbreaks was recorded in Japan in 1982, with others since then being documented from the Red Sea, Kenya, Thailand, Hong Kong and Western Australia. They can consume coral tissue at a rate of 1.8 cm2/day per individual with coral cover reduced by 75% in some outbreak cases (Cumming, 2009). The cause of these population explosions is not fully understood but is assumed to be based on the impacts of decreased water quality and loss of natural predators through overfishing (Moyer et al., 1982). Stressed corals are also weak corals, meaning they don’t have the normal defensive capabilities to keep corallivores at bay, leading to a point of entry for Drupella. In modern times, corals are incredibly stressed due to a multitude of factors such as rising sea temperatures, ocean acidification, pollution and overfishing. All of these factors have led to the population outbreak conditions and resulting destruction of many reefs by Drupella snails (Scott et al., 2017a). 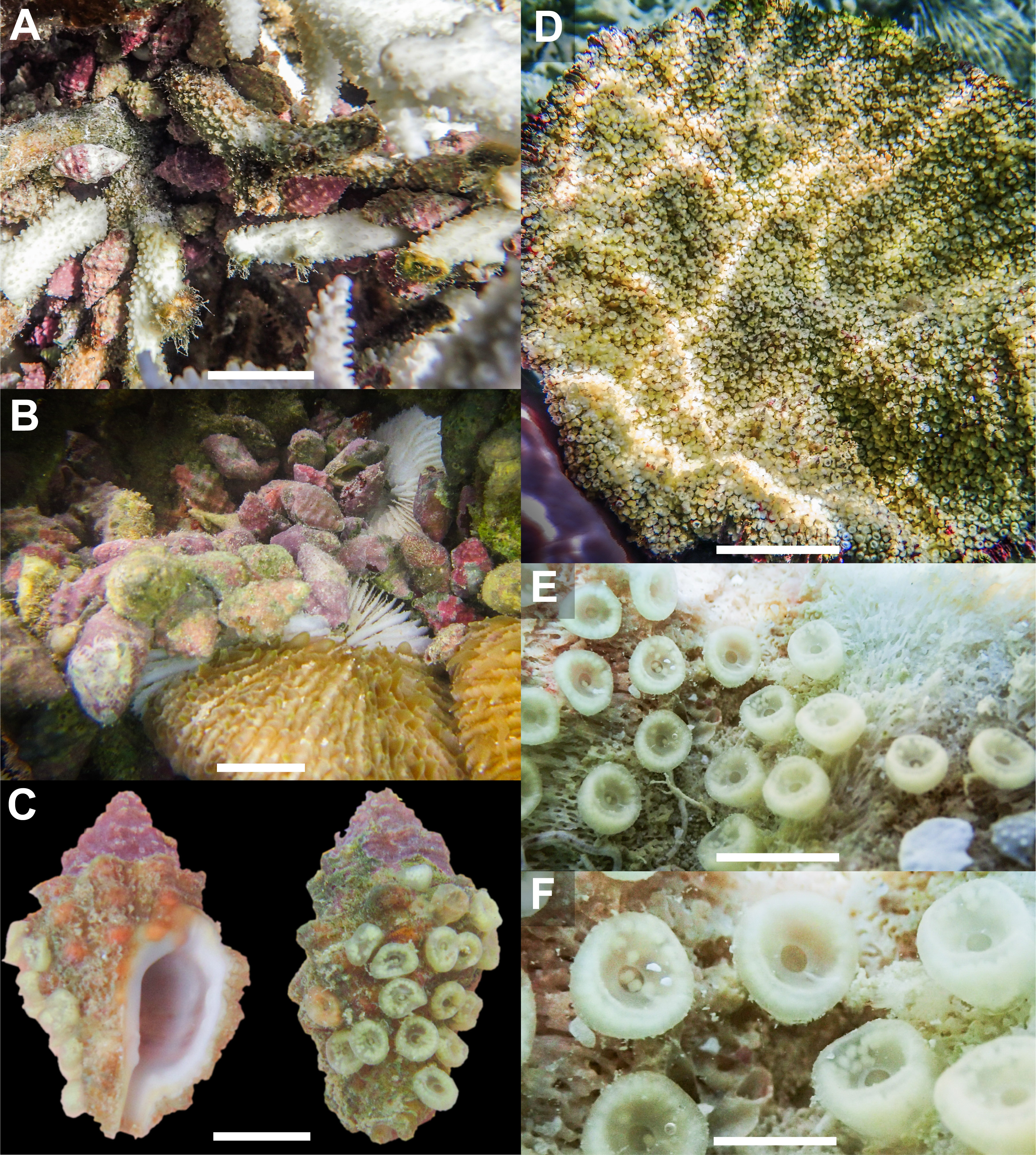 Our paper from Mauritius was just one more step forward in understanding more about Drupella and how to combat their population explosions. The paper recorded the highest density egg deposition in the world to date by Drupella snails. We found huge groups of egg bundles attached to the undersides of coral skeletons, with some equating to over a million embryos under one skeleton. Very little is known of the reproductive ecology and life history of Drupella. The first ever record of in-situ egg deposition by Drupella was recorded by Conservation Diver on a mushroom coral in Koh Tao Thailand (Scott et al., 2017b). Our work in Mauritius represents the first documentation of in-situ egg deposition in the western Indian Ocean. Our findings are also of importance to understand reproductive habits of Drupella. Finding egg capsules placed on dead Fungiid skeletons, dead Montipora coral pieces and even on a living Drupella individual provides remarkable insights into the ecology of Drupella spawning in reef environments. Drupella are mass spawners, with females producing between 1,244 and 159,000 embryos per spawning. The females deposit egg bundles in clusters on hard substrates, following this comes the pelagic larval stage, where larvae have been documented to drift up to 180km from their origin. Once settled, the Drupella individual takes 2.5-3.5 years to reach sexual maturity and have very long lifespans of between 25-45 years.

Little is known about coral species preferences for these egg bundles and our documentation adds more knowledge on their ecological impact. Mauritius reefs, unlike the reefs in Koh Tao, have a low occurrence of Fungiid corals. These findings, of egg deposition on Fungiids in Mauritius, suggest a preference for Fungiid corals as suitable substrate even in areas with low mushroom coral populations. An egg deposition of this size also suggests that Mauritian reefs are currently undergoing a Drupella population explosion. With these reefs already stressed from multiple years of bleaching, this threat must be closely monitored. Our paper helps other marine biologists and conservationists better understand these little invaders and gets us closer to being able to effectively combat population explosions. We at ATMEC are currently monitoring our island home, Koh Mun Nai, for Drupella populations and continuing research into their ecology. If you are interested in learning more about Drupella, our research, or would like a copy of our paper, feel free to contact us!

Back to  Articles
View Featured Courses →